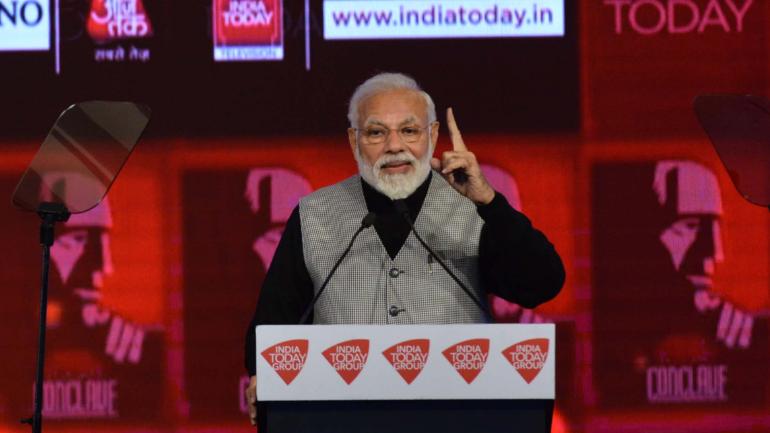 Prime Minister Narendra Modi said on Saturday there was fear among anti-India elements, fugitives, the corrupt, and that big leaders were afraid of going to jail. He said the fear was a good thing.

PM Narendra Modi was speaking at the India Today Conclave 2019 in New Delhi, whose theme was ‘Hard Choices’.

PM Modi and the BJP-led NDA face a national election due by May.

In 2014, powered by a wave of support for PM Narendra Modi, the BJP crossed the majority mark in the Lok Sabha all by itself.

PM Modi said at the India Today Conclave that during his NDA government’s tenure, the corridors of power were free of middlemen because they knew this administration would not tolerate corruption.

He said his government’s 55 months in power and 55 years of the others had given two contrasting approaches to governance.

He highlighted the speed of India’s progress under his government with a shout-out to Aaj Tak’s tagline: “Sabse Tez”, or “The fastest”.

Specifically, he was highlighting the speed of progress in multiple areas, including the creation of homes for the poor, roads, mobile manufacturing units and optical fibre networks, and the development of the railways.

Sabse Tez, he said, was his government’s lifeline.

PM Narendra Modi also thanked the India Today Group for participating in the Swachh Bharat Mission, which he launched in 2014.

In 2015, the India Today Group launched the Safaigiri Awards to felicitate pioneers and showcase their efforts to change the public attitude towards cleanliness.