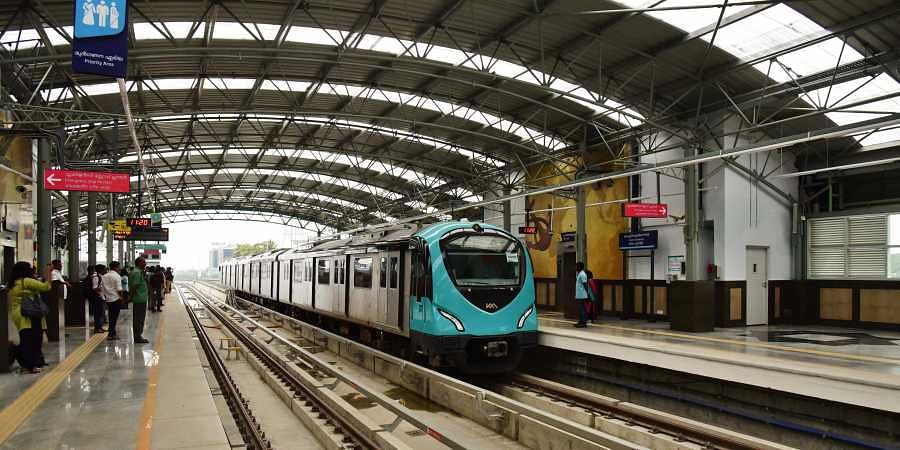 KOCHI:  Launching the Kochi 1 Metro smartcard integration to private buses, Chief Secretary Tom Jose on Saturday said Kochi would become a world-class city having world-class transportation facility. He said numerous projects for Kochi are in the pipeline. Kochi 1 Metro Smartcard was launched by Kochi Metro Rail Ltd (KMRL) for the metro commuters in 2017. From Saturday, the card can be used in private buses also. Initially, the facility can be used in 50 private buses plying within city limits. Later, it would be expanded to all 1,000 buses in a year.

“It is a great pleasure to hear that Kochi is the first city in India to have such a smartcard facility. Now the integration of autorickshaws should take place. Similarly, the boats will also have similar facility with the launch of Water Metro by the KMRL soon,” Tom Jose said. He said the government is seriously considering to turn the six canals in Kochi navigable. “Kochi is interconnected by canals which have become waste dumping places for residents.

A Rs 1,000-crore project to clean these canals and turn them navigable is under consideration. The day will not be far when we will see boats plying through the canals in Kochi. A fund of `500 crore will be set aside for the rehabilitation in connection with the project,” he said. Another project under consideration is the construction of an entertainment park at Kakkanad. “The major issue with the cities, including Kochi, is the absence of hangout places where people can spend time. We are looking to provide IMAX, virtual reality and zero-gravity facilities in Kochi,” he said.A P M Muhammed Hanish, MD, KMRL, said the integration of Smartcard in private buses is key for KMRL.

“Over 25,000 smartcards have been issued till now. We are looking to complete the extension of Kochi Metro till Thykoodam and Petta this year. In the next 10 months, Water Metro will become operational. Another major step taken by the KMRL is to integrate over 10,000 autorickshaws for feeder service from metro stations. No city in India has an integrated transport system like in Kochi,” he said. K R Jyothilal, Principal Secretary, Transport, said it is a proud moment for Kerala as the KMRL launched the smartcard that can be used in both metro and private buses. “In fact, we have to explore the possibility of integrating identity cards and important documents with the smartcard.

The card also provides services like bill payment. We should campaign about the card abroad so that tourists coming to the state can use this card for all their purposes, including travel, lodging and hotel bills. The smartcard service should be expanded to entire Kerala. We should have ‘One state, One card’,” he said.

Kochi: Kochi Card1, a joint initiative by Kochi Metro Rail Limited (KMRL) and Axis Bank to integrate payments for all modes of public transport on a single card, will put the state’s business capital in the league of London, Sydney and Singapore, offering an integrated mode of transportation. Kochi Card1 users can now use for commuting in buses in the city, metro parking facilities, etc. Axis Bank are in talks with the authorities to expand the payment facility to ferries, KSRTC services and autos in the city, to be implemented in a phased manner.

Axis Bank Executive Vice- President & Head Sanjeev Moghe said 50 buses will start accepting payments through a simple tap-in terminal provided to them from Saturday. “The services will be extended to about 120 buses in a few weeks and we’re confident of getting the total fleet of private city buses, about 950-1000 of them on board in 2-3 months,” said Moghe. “The Kochi Card1, a Rupay-enabled prepaid card, comes with an upper load limit of C1 lakh with full-KYC norms and C10,000 with the non-KYC requirement. The card can also be used as a normal debit card at all payment kiosks. The Kochi Card1 users can also avail all Rupay card offers and access to lounge facilities across Indian airports,” said Moghe.